Donate now
* this value includes Paypal donations which are not updated in real-time.
USD
via Paypal

Donation is processed through Michael's company in South Africa, 100% of funds will go to the Children of Deccan.
ZAR
via Candystick
Donate now
Our Dream
To create a children's home that is seen as a leading role model in its field. We hope to use our passion and love, combined with modern technology, to create a blue print for a modern children's home, which can spread to many other locations across India and the world. 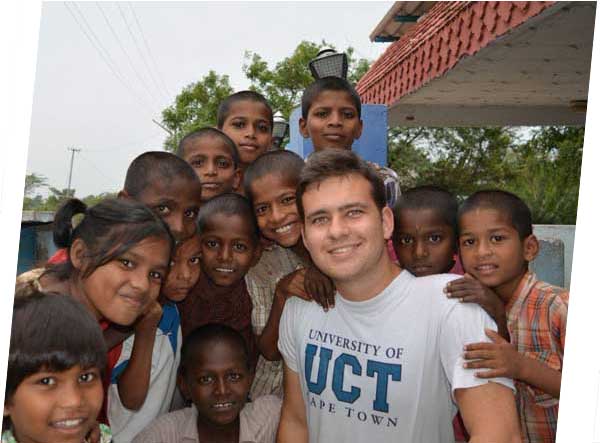 My name is Michael Hubbard, from South Africa, and this is my story of how I travelled to India in 2011 for a two-month community development internship.

I was a student at the time and came across an organisation called AIESEC, a global youth-led leadership development organisation. Quite a mouthful, but their work is impressive and the traineeship led to an incredible cultural, social and emotional experience for me..

I ended up in Hyderabad over Christmas, not knowing exactly where or what I'd be doing, just that it involved working with underprivileged children. I was assigned to a Children's Home on the outskirts of the city, with four other international interns. The two months that followed were truly life-changing. I spent two months living with the children; eating breakfast, lunch and dinner with them. I'd see them leaving for school, during their lunch break and in the afternoons. These children amazed me with ther kindness and joyfulness. It was such a relaxing experience to be around children who were so happy despite the card life had dealt them.

What amazed me too, was the passion and commitment of the Administration Manager, Malkanna, who treated all these children as his own. He is the person in charge of running the home day-to-day and is an exceptional human being, whom I am very grateful to have met and to call my friend.

At the end of the two months it was an incredibly emotional farewell. Our mandate had been pretty open, we were told we could do whatever we wanted as long as the kids were happy. The goal was for them to be exposed to new cultures and languages, as well as have someone spending time with them and giving them attention, something that is often sorely lacking in a Children's Home. This became our ultimate goal, and we aimed to show the children that we were not better than them, eating the same meals from the same plates and living in the same place as them. They became my younger sisters and brothers, and to this day I am "Michael Brother".

When I was leaving I had to promise to return, and I don't make such promises lightly. It was important to me not to lie to them, as so many others had before. Six months later I was back in Hyderabad, and thus began a cycle of visits to India to spend time with the children.

As I grew older and graduated from university I started a software development business that conveniently operated in both SA and India. This allowed me to move to India and live there for a few years, during which Malkanna and I often spoke about all the changes we'd love to make to the home and how amazing it would be to be able to be in full control.

Unfortunately the NGO running the home was not based in Hyderabad, and over the years it became evident that they were losing interest. A few years ago they stopped paying Malkanna, who despite this continued to care for the children and ensure the home ran smoothly, although he could no longer be there as much as he was before.

More recently the rent money stopped coming, school fees were unpaid, and they've now ultimately indicated that they will vacate the property and cease operations this month.

While this creates a massive problem for the children who until last week were living in this home it also opens the opportunity we had been waiting for. For the past few months Malkanna and I have been planning for this transition, discussing the logistics, finances and actions required, and thus we find ourselves here, with our initial fundraising effort to achieve this dream of providing these children with a future.

Why us and our method 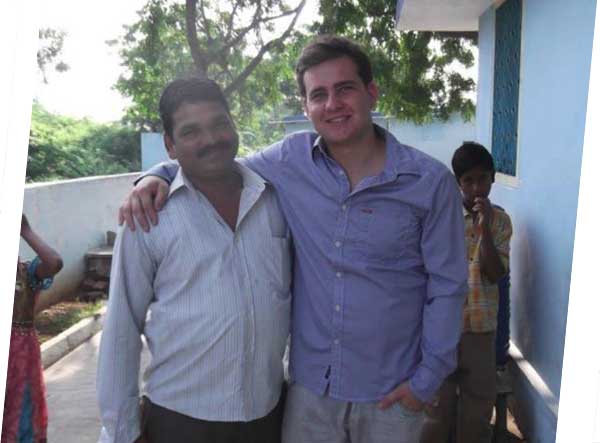 Malkanna has been working in this space for over a decade, part of the team that originally created the Home. He is passionate about community service and is extremely experienced in running a Home. To the children he is a father figure, a caregiver, and they all respect and listen to him.

His passion is in providing service to the community, reflected in his many other engagements as well. He knows all the relevant local traders and is familiar with the processed and paperwork required to properly run a Children's Home in Hyderabad.

Michael is a tech entrepreneur who has a passion for these Children after his initial traineeship at the Home, and has been looking for ways to help them ever since. He hopes to use his expertise in the software development industry to bring innovation and technology to the Home, both for the benefit of donors and the organisation's fundraising, but also for the betterment of the children's technical knowledge and to imrpove their readiness for a live in the 21st century.

Together they have dreamt of being able to run their own Home for many years and this is their opportunity to show how their care and passion can result in a positive outcome for many deserving children.

Additionally through the use of modern technology, from something a simple as an up to date website and social media presence, to automating and improving internal processes in the Home and educating the children, they believe they can bring a critical improvement to the sector that is otherwise still mostly functioning by traditional methods.

How we're going to tackle this

We have a basic three-stage approach, outlined below. Our strategy will be evolve and be shaped as we go along, thus we have this basic blueprint which will guide us on this journey:

The long-term vision is to become a model Children's Home, in terms of the care provided, the infrastructure available as well as the technology utilized.

We envision implementing a set of standard policies and procedures, with easily implemented check-lists for staff to follow and crafting a daily schedule that incorporates the right balance of education, social interaction and playtime.

We will look to digitize the inventory of in-kind donations and establishing feedback channels to inform donors of the use and distribution of their donations. Other technology uses involve the on-site capture of receipts and digital capture of new children coming in, as well as maintaining a register and visitor log digitally.

As part of the modern education we will aim to provide exposure and training on computers and the internet, typing skills and general life skills. This would ideally include a full computer lab at the home.

Ultimately, we aim to implement a system of biometric or RFID check-in and check-out of children leaving to go to school and returning, online logging of a child's academic progress and physical health and ability for donors to sponsor a child and monitor their progress through secure login.

Who and where are the children?

The children come from varied backgrounds, some are orphans, some have health problems, although not all. However what all share is that their families are often unable to sufficiently provide for them, resulting in poor or no education, a lack of proper nourishment and often, a home environment that isn't beneficial to childhood development.

There used to be about 60 kids, about half of which were girls. However new government regulations meant the girls have to live separatey from the boys. They stay in a sister-organisation in the city and the girls and boys meet a few times a year (some are siblings).

Right now it is the summer holidays and most kids have gone to their families as they do every year, thus the home is empty (a few who have nowhere to go stay with Malkanna or in the girls' home). The new school year starts on 1 June, and we aim to have something basic in place by then to provide for the children and enrol them in school, building from there onward.

For this we need to sign a lease agreement, have mattresses, blankets, a stove, kitchen equipment and utensils, plastic buckets and jugs, soaps, tooth paste and brushes, food 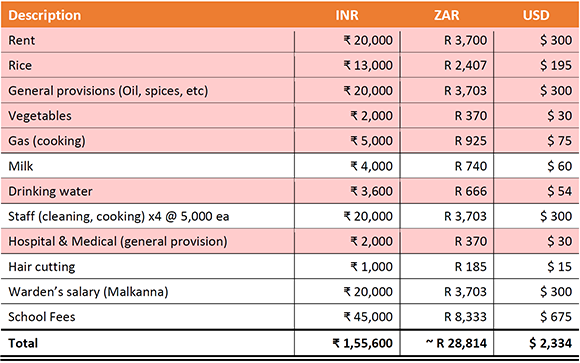 How much money are we talking about

Our continuing monthly expenses at a basic level (including schooling) are estimated at R29,000 (Rs 155,600 / $ 2,334) based on the actual expenses incurred by the home previously, which we are privy to. The breakdown is as shown alongside. 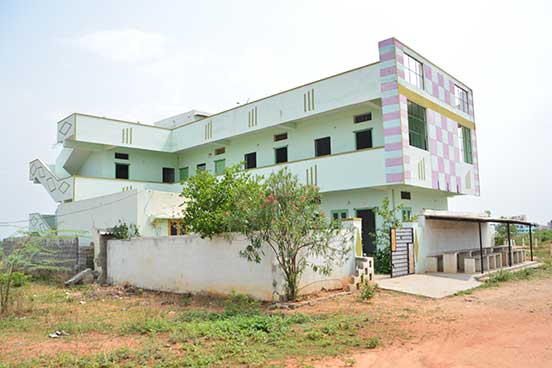 The home is located on the eastern edge of Hyderabad, one of India's largest cities, in the area Hayathnagar. A major highway passes through Hayathnagar, an area which was originally a village and is slowly being absorbed into the city.

The home itself is about 2km from the centre of Hayathnagar and the highway, in a less developed area, a gated community is a few hundred metres away. It is ideally suited to this kind of home as there is no traffic, no busy street outside and no sound or other pollution. This leads to fewer strangers walking up to or into the home, as well as making it harder for children to run away, as they occasionally try to do when they miss their families.

We had to find this building at short notice after the one we had lined up before fell through at the end of May. Fortunately we found this building, which has a ground floor, first floor and a terrace with a total of about 20 rooms. It was used as an old age home previously and then briefly by another NGO as an orphanage. 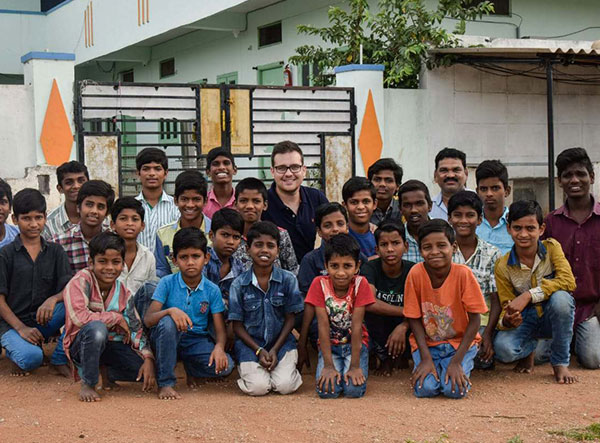 Please note that while we have applied for registration under section 80G of the Income Tax Act, until this is granted we are unable to provide tax deductible receipts for your donations. We hope that this will not stop you from contributing however.

You can donate directly via the button below debit/credit card, Netbanking, UPI or mobile wallets, all funds are processed by PayU directly to our trust account. Alternatively you can make a direct bank transfer to our bank account given below, in which case please also call or e-mail us to inform us from whom the donation is made.

We are appreciative of every contribution, no matter how big or small. We require many things to support the home and the children, from clothes, to shoes, toothbrushes, soap, books, food and funds for rent and salaries.

If you would like to support us, either through in-kind donation of items, or financially, please do. You can donate via bank transfer to the below account details, or connect with Malkanna on 9959646498 to arrange delivery of items or cheques.

Account Name: Children of Deccan Foundation
Account Number: 918020060481199
Bank: Axis Bank (Hayathnagar Branch)
IFSC Code: UTIB0003173
Please include your name as reference and also call or SMS Malkanna to inform him of your contribution, we will be happy to send you a receipt.

Would you like to support us or find out more?

Please call Malkanna on 9959646498 or send an e-mail to info(at)childrenofdeccan.org